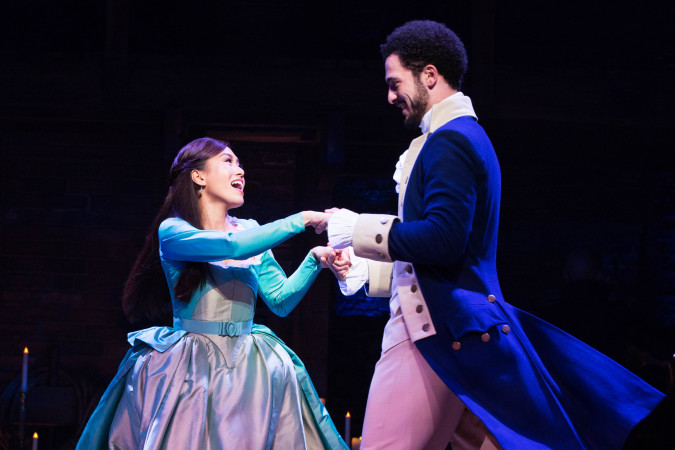 I went to Hamilton and it was pretty great. Five Stars. Admittedly, when it comes to hot takes that one right there is pretty tepid. As Matt Trueman mentions in his WhatsonStage blog, if you’ve been sentient over the last two years, there is really no need for me to tell you just how critically-acclaimed, clever, relevant, inspiring or any number of other praising adjectives the Lin-Manuel Miranda-penned show, which has just opened at Victoria Palace Theatre, is. Instead, I want to talk about Hamilton and rewriting. The cautious reader might think it foolish to bring up rewriting when talking about a Pulitzer-prize and Tony-award winning show, so before There is Five Things You Need To Know:

No. 2. I gladly confess to regularly trolling the murky depths of Tumblr in search of a new fix, preferably in the form of a gif of Renée Elise Goldsberry (a leading actress from the original Broadway run) being sassy on stage, a lip-sync battle video between members of the principal cast, or a YouTube marathon of songs that didn’t make it into the final stage version.

No. 3. I was utterly swept up in the celebratory atmosphere that surrounds the new London incarnation of the show.

No. 4. I cheered and sobbed and jumped to my feet and sighed and did all the things you do when you finally experience something that you’ve been listening to on your headphones for over a year.

No. 5. I felt pathetically happy coming out of the theatre.

But despite building anticipation over several months, and generally agreeing that what we had just seen had outstripped all our expectations this is what happened next: upon leaving the theatre, two of my female theatre-going buddies turned to me and said: “So… we want to rewrite the show from the perspective of the Eliza Schuyler because she’s the real star”. For the uninitiated, Eliza is the wife of the show’s eponymous hero, Alexander Hamilton, one of the United States’ founding fathers. Crucially, in addition to single-handedly creating America’s financial system, Hamilton was also what we would now call ‘a self-centred douche’. But still, why would a show that has famously been hailed for its post-racial politics elicit such a reaction?

Setting up legacies, dominating the narrative, rewriting and telling our own life stories; these are the central themes of Hamilton, as any number of opinion pieces and publications since its opening in 2015 have pointed out. And the real Eliza played a crucial role in how the legacy of her husband continued after his death. History is not, as the proverb has it, written by the winner. Neither is it a static series of neutral facts that can be understood and learned. History is constantly in the process of being made, lived, written, rewritten, and remoulded. Hamilton does not simply use rap music to retell the story of the American War of Independence. It considers hip hop and the genre’s history to be a revolutionary musical mode, and then blends this with historic characters and ideas that have become part of the American national identity. Squabbles over defending the US constitution, lurid political sex affairs and rapping founding fathers, eighteenth-century politics never sounded so current.

Transferring such a uniquely American mashup of a show to London comes with its own battles. The first thing that has been made anew, in a quite practical sense, is the Victoria Palace Theatre. The paint is still drying in places, but it’s a gorgeous space with terrific sight lines and super comfy seats. While you stand in a merchandise queue that stretches over two stairways and contemplate whether you could get away with buying the youth hoodie in XL instead of the more expensive adult one, you can bask in the shiny newness of it all. Though it must be said that the refurbishment has resulted in a programme contribution by Cameron Mackintosh that is too many damn pages for anyone to care about.

The American Broadway show was a trailblazer in many respects. It challenged industry norms in regards to racial representation on stage and what types of music are deemed palatable for mainstream audiences — something that can only do good in the notoriously non-inclusive London theatre industry. But, while still in New York, it also stirred up discussions about privileged access and exorbitant ticket prices. As a result, the London producers have put measures into place to try and avoid the same extortionate ticket touting, so far to only limited success.

Other challenges will perhaps be even more tricky for the London cast and crew to negotiate. They carry on their shoulders the weight of a Grammy-Award winning album and they need to do some major reworking on the audience’s ears, which in large swathes will have grown accustomed to the Broadway recording. The London production does this boldly. By casting fresh-out-of-drama-school newcomer Jamael Westman in the title role, and by giving the part of antagonist-narrator Aaron Burr to Giles Terera, they have decided to give the London production its own distinct sound. Less crisp and show-tune-y than Leslie Odom Jr. from the Broadway cast, Terera’s voice has a more characteristically jazz-tinged timbre. Between them, Westman and Terera unveil all the shades of grey in the traditional hero and villain-scenario.

And then there’s the other elephant in the room. It might not have escaped readers that the empire from which the American republicans sought independence was the British one. How does a celebration of that victory fly in front of a contemporary British audience? Unsurprisingly, the British audience seems to be utterly besotted with King George III. Huffing, eye-rolling and strutting performer Michael Jibson milks the ridiculous toff-ness of the emasculated monarch for all its worth.

Despite knowing the story and songs inside and out, I have to admit that I wasn’t quite prepared for the moment when the Marquis de Lafayette (superb comedy acting from Jason Pennycooke) and Hamilton, about to fight the British troops, shake hands and chant “Immigrants, we get the job done”. The audience cheered as I’m sure it has done many times before in its New York run, and I started blubbing. And that’s the deal with Hamilton right here. I know that this story is not about me, a white EU immigrant in London, yet it affects me personally because I can see the UK’s own relationship with patriotism changing every day before my very eyes. The story, the characters, even individual lines concerning such a specific historical context, are made to feel so universal that they lend themselves to reshaping around individual listener’s own biographies and experiences.

So, yes, I might have been initially stumped by my friends’ comment about ‘rewriting’ Hamilton. Yet reshaping the narratives of what’s believed to unchangeable is in the DNA of the show. There’s even an official mixtape remixing the original tunes to prove it. And while I know that Hamilton is still only a big piece of commercial entertainment, it was ultimately heartening that after a year that was all about female voices finally being heard, these two twenty-first century women came out of the show and didn’t just simply fawn over how brilliant everything was. Inspired by the electrifying performances of the London Schuyler sisters, Rachel John, Rachelle Ann Go and Christine Allado, they had no problem voicing their issues with some of the more sketchy aspects of the show’s feminist politics. The transformative impulse that drives the show has kept its momentum even after having been shipped across the ocean.

As an addendum, I’ll risk sounding like I have a bit of a chip on my shoulder. Judging from social media conversations, it appears that the producers of the London show did not offer reviewing tickets to bloggers or alternative reviewing sites such as Exeunt and instead prioritised the traditional news outlets. While I can see how that decision can be justified in trying to ensure widespread coverage for the show while it is still settling into its new home, it is disappointing nonetheless. Given that rewriting is at the heart of Hamilton, how great would it have been if the producers had acted more in accordance with the politics of the show and tried include bloggers and sites like Exeunt from the very start? Pretty great, right? (And to be sure, Bridget Minamore’s Exeunt review is stunningly thought-provoking). Because by facilitating and supporting alternative criticism you ensure that a diversity of voices can be found not just on stage but also in the reception and fan discussions. And if the show does not have rewriting at its heart then perhaps all it deserves are reviews saying: “I went to Hamilton and it was pretty great. Five Stars” (or “Nice jodhpurs. Three Stars” as the Daily Mail did). And nothing more.