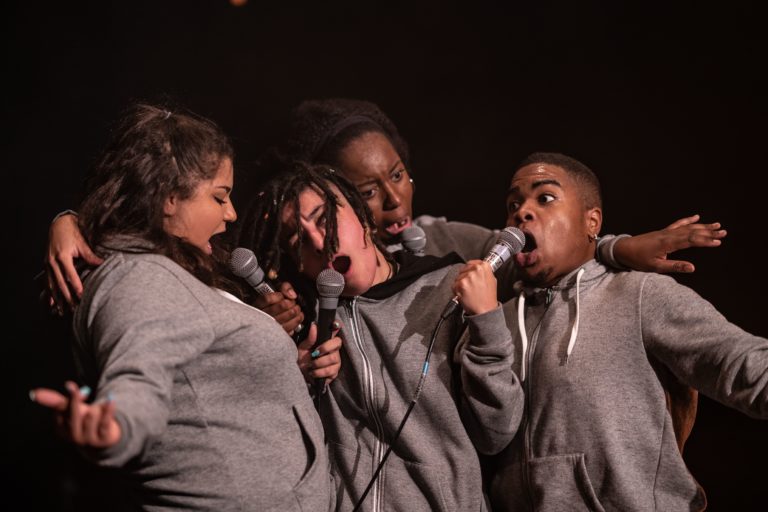 I press the inside of my palm onto my throat, thumb resting on my jaw bone. The tongue in my mouth, sticky and heavy, presses against my front teeth. A heartbeat against the heel of my hand. I begin to hum. These vibrations. This is my voice. I rip it out. As I dig my fingernails deep into the flesh, the skin splices open delicately. I need to tighten my grip and use some considerable force to pull. These vocal cords are sturdier than I thought. They stretch and stretch and when they finally tear, I lower my hand to the notebook on the table in front of me. I look down and see the purple lumps amid the reddish gristle. It’s beautiful and still hums. I spread my voice all over the page.

In 1818, a young woman found her then shocking literary voice and transformed an outrageous idea into reality: a genius scientist gives life to a new monstrous human, only to abandon it, be haunted by it and have all his loved ones killed. Two hundred years later, Mary Shelley’s characters and story have become so iconic that they’ve come to signify anything from complexity of climate change to the latest questionable neoliberal financial scheme.

Yet, it is not really the range of meanings that Frankenstein’s creature can take on that seems to have inspired the hugely successful beatbox show Frankenstein: How To Make A Monster, which has now returned to the BAC as part the of the Homegrown Festival: Occupy. Rather, it is Shelley’s own radical act of finding a voice as a young 18-year old writer that seems to drive the creative spirit of the show. And that is because beatboxing – the craft of weaving soundscapes during a live performance solely with the amplified human voice – is not at all unlike writing: a startlingly creative act that requires quick wit and talent and which can have a powerful impact on an audience.

There are two halves to the evening. Staged in BAC’s gorgeously rebuilt Grand Hall, the first hour is the ‘main show’ and we meet the five beat box performers each with their own character and vocal traits. Aminita’s singing voice for example will make your tummy lurch in that Whitney Houston-sort-of-way, or there are Glitch’s dizzyingly fast and dirty rhymes. Rather than a retelling of the source material, the show is an ongoing citation process that very loosely splices the overall story arc of the haunted scientist with very normal school-age worries such as bullying and smartphone addiction. These topics are never presented in a didactic fashion, however. Instead they are clothed in rhythmically and lyrically extremely sophisticated compositions that quote extensively from the popular and classical canon. Although I personally didn’t catch the Bach that some other reviewers spotted in the pleasing mêlée of references, I did get some others. It all sort of pleasantly vibes with richness of Hamilton or Sondheim.

Gig-theatre can at times feel theatrically lacking, as it sometimes awkwardly tries to transition from its spoken sections into its musical parts. There is none of that here. Developed over two year in the BAC’s Scratch programme and under Conrad Murray and David Cumming’s direction, the staging, lit atmospherically by Sherry Coenen, is confident, exuberant and witty. The second part of the evening is set apart quite deliberately and consists of a few sets of rap battles and improvisations in which the whole audience is entirely swept up. The mood in the room is certainly aided by BAC’s recent decision to introduce more relaxed performances into their programming – audiences are free to get up and join in and record their favourite sections of the battles on their mobile phones.

There was a moment during one of the battles in which an 8-year-old performer called Seth responds to his challenger by languidly repeating a few bars from the previous set. He stops and mockingly shouts: “This is not my style!” He lifts the mic to his mouth and within seconds the floor and walls of the Great Hall vibrate with an impossible mechanic rattle. A few gasps and then the crowd goes absolutely wild for the inhuman sound coming out of this young person’s mouth.

Youth engagement and participation projects in theatre are often thought of in terms of ‘giving voice’: to those underrepresented or disenfranchised. The BAC’s Beatbox Academy programme has been around for twenty years and it seems that this youth project does not understand voice as something that can be easily given. This show instead joyfully, confidently and – perhaps surprisingly – slickly stages how five young performers find and literally amplify their own voices.

When Viktor Frankenstein in Shelley’s novel meets his creature for the first time, he is so shaken by the encounter he claims the following: “He might have spoken, but I did not hear…”. Well, this Frankenstein is a real celebration of young makers being heard by an enthusiastic audience. Luckily, we seem to see this happen more and more outside of the theatre also. From the Nobel Peace Prize-recognised climate change activists Greta Thunberg and girls’ education activists Malala Yousafzai to young anti-gun high school protesters in the US, young people no longer wait to be given a voice. They take it and sometimes it’s messy and difficult and controversial. And, in the case of BAC’s Frankenstein, it’s also incredibly joyful.