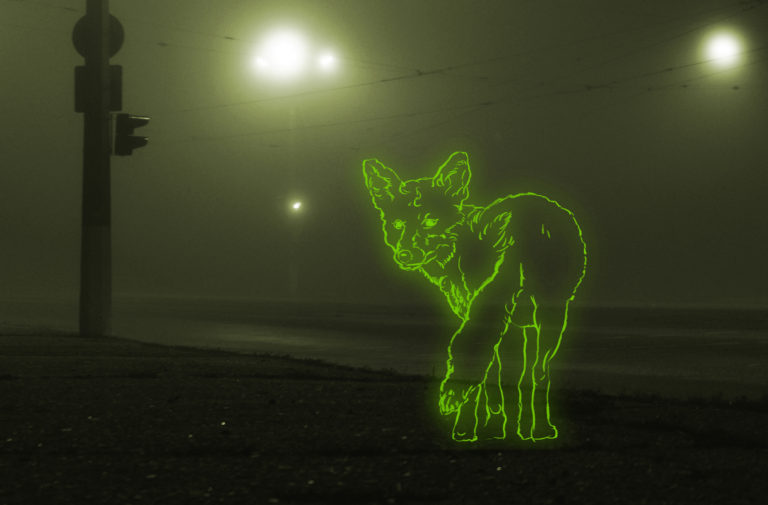 Becoming-fox, a quick manual:
– Keep close to the walls
– Practice your sweet, sweet love-making sounds only after dusk
– Stare the fuckers down

The full moon shines on Deptford town square. It smells of piss and one of the two guys in the corner is chewing down on a shawarma. In front of the community library a retro-vibe installation themed around the human relationship with animals draws in curious onlookers. Abandoned snake skin, various bottles with liquids and trinkets, a dead hare, a TV set plays an episode of Flipper on VHS. A taxidermy fox on its hind legs smiles at me reassuringly and offers a plate of freshly polished apples. Some bunched up flags in the centre of the table signal that I’m about to be confronted with a global issue. As it turns out, shawarma guy and I are going to spend the evening as part of the same group in Andy Field’s new show at the LIFT festival. Realised in collaboration with the Latvian artist Krista Burāne, Nocturne is a promenade piece quite literally – a series of silent walks exploring the area of Deptford and listening in on the sounds of the city, or what the theatre makers call a ‘night song’.

I’ve spent nights in Deptford before and the songs I heard then were neither melodious nor particularly connected to the natural world. I’ve also worked in the local Albany theatre and community buildings. A few years ago foxes, during their nightly excursions, had stolen chickens that the staff had lovingly baptised with names like Chickney Spears. I was ready to listen to what these night-time tricksters might be willing to tell me in their defence. As such, the idea of exploring this alternative night life of the local animals immediately appealed to me.

Before the show starts and we go into the library the audience is divided into small groups. Andy Field asks our group whether we knew to what animal the strange skull with the massive yellow teeth on the far side of the table might have once belonged. I say “Beaver?” Andy nods and I feel like I’ve already proved myself as an ecologically aware human. Shawarma guy looks like he couldn’t care less. Inside we are handed over to a performer who will be leading us on our walks. And soon after we’re off, hanging onto a rope attached to our guide’s belt, making our way across busy streets, past silent church yards, through railway arches and grassy inner-city green lands.

Deptford can be a loud, colourful and messy place but it has recently undergone some significant changes. The speed of the area’s gentrification is breath-taking. The artificial lights from the newly developed high rises reflect in the old Deptford creek and illuminate some ducks. Then on a later walk, a gaggle of geese congregating in the river bed. On our first walk we too are a flock, arranged in a kind of loop behind our guide who is a small, soft-spoken woman with a gentle face. She tries to tune us into the bird song. Animal noises are mixed into the shouts and laughter from the lively housing estate through which we pass and when our guide spots them she walks more slowly and urges us to notice and drink them in. To be honest though, I doubt that shawarma guy’s friend is getting it – he only has a non-committed single finger hooked over the rope that connects us all.

Matt Trueman describes the show as “partly a crash course for flaneurs, disrupting the way we navigate urban space,” saying “it’s mostly a reminder that the city is shared”.  While I agree that a different way relating to the space and its temporalities emerges, I think that the piece angles towards shifting something a lot more fundamental than the human relationship with space. Rather than being a strolling explorer of our city, the piece probes whether the looping of experience (we do the same walk three times) and fabricating artificial moments of stillness can allow us to tune us into non-human frequencies. It asks whether in some incremental way we can shift something within us. Can theatrical forms facilitate the practice of becoming-animal, or at the very least help us to hear their voices more clearly among the noise of the city?

In the way it tries to explore new relations between humans and animals, Nocturne struggles on a few accounts. In between the walks, there are small interludes working with vocals and material objects that at times feature some surprisingly heavy-handed eco-critical symbolisms. This is easily forgivable, because, at least in my book, the piece has the right politics.

More problematically then, the performance tries little to involve the audience’s own physicality (apart, perhaps, from one-finger guy who keeps treading on my heels). While there is some experimentation with different movement types (such as when we as a group are moved around a little bit like foxes ourselves) the input from the guide during the walks is kept to an absolute minimum. And being on a silent walk means that the mind necessarily wanders. When we see our first fox (one of many that night) I am indeed thrilled, but I also can’t quite get over how the team must have dramaturgically engineered this encounter. The walks are long, stretching out over the whole evening, and towards the end of the second walk my back aches. Little mundane thoughts creep up on me, for example, I keep thinking that it is a shame I left my phone in my bag – by now I would have easily made up my daily step count. Instead of a new embodied experience I am just a little bit beside myself.

Another issue weighs a little heavier. When it shifts its focus away from auditory sensations (by channelling animal sounds through the human vocal chords of the performers into a stunning cacophony), Nocturne becomes quite dependent on the scopic regimes of humans – how we watch and how we are being watched by others. Not only do we look at and compare the changes in ‘natural’ and human habitat throughout the evening, we are also being noticeably looked at by the local residents. If it tries to tune our sensibilities into the non-human life forms, it somewhat lacks a sensitive ear for how the local human residents might perceive this artistic intrusion. Several times people come up and want to know what it is these strange groups of people are doing when prowling their neighbourhood. The answers and interactions in these moments are somewhat dissatisfying and leave a bad taste about how the piece is disconnected from the local land on which it stakes out its eco-critical argument. If set in an area that is being rapidly transformed by capital investment, art must be woke about how itself contributes to the sense of alienation that local residents might feel about that change.

On my solitary walk back to the train station I feel more unsafe than in my pack of pretend-animals; I am a human woman out late at night in London after all. The only sounds I hear are from my headphones feeding a podcast into my ears as reassurance. It is then that one of the foxes and I meet again. I lock eyes with it for a long time and, of course, I still can’t make out what it is trying to tell me. Maybe it just wants me to go away. And so, I do.