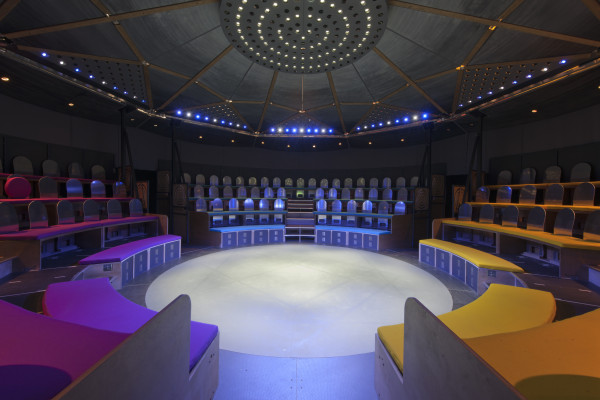 Just two people having a conversation, no props, no set – Duncan Macmillan’s Lungs is clever (life-altering discussions in IKEA-clever), funny (rambling, self-interrupting monologues with ecological self-awareness funny) conversations in the plural and I’m utterly absorbed in the quick to-and-fro, the quips and all the linguistic intricacies of Macmillan’s writing.

I’m sitting in the Roundabout, Paines Plough’s new pop-up theatre, and George Perrin’s staging in the space exposes the rhythm of the piece in a way that almost makes me forget that there is no scenery. Lucy Osborne and Emma Chapman are the two designers behind this new versatile venue. The gap the Roundabout attempts to fill in the theatre landscape is quite considerable. The collaborative design process had the team battle with technical advancements and saw them challenge concepts of regional touring, community involvement and pop-up culture to champion new writing. After all, that’s what Paines Plough has been doing for the last 40 years.

Some of the best ideas have started out as doodles on napkins and James Grieve’s and George Perrin’s vision for the Roundabout is no exception. “On the back of a receipt for dinner or something, they literally wrote ‘pop-up theatre’, 10 m square, and then they did a little drawing of a circle, put in a little square, they went, it’s this high and all of that… and none of it is what we ended up doing but that was what I got.” Osborne’s first ever design job was on The Long and the Short and the Tall in Sheffield directed by Josie Rourke. Grieve was the associate director on the show and later, when Rourke and Grieve worked at the Bush, Lucy became an associate artist there and a strong work relationship was formed. Looking at some of her previous work, Osborne describes it as being guided by “thinking about the architecture of the space and about the relationship between the audience and the actor who stands in the middle of the playing space, it’s a very pure way of designing a show.” With new writing in particular it makes perfect sense to get rid of all the extra baggage and just focus on the acting and the language but that insight was hard-earned for the theatre designer.

In 2012 she teamed up with Grieve again for a 21-week mammoth tour of the Mike Bartlett piece Love Love Love and they became frustrated quickly with the rigours of national touring. “It was three different box sets with two intervals and it was the same cast in three completely different time periods. So it was 1967, 1997 and the present day. There was tons of scenery, it was huge and we were touring to such disparate venues that everywhere it went it was so enormously compromised.”
When Grieve and Perrin first took over Paines Plough as artistic directors, they had started a dialogue about touring new theatre with regional audiences. The most important feedback they got was that audiences just wanted to see what was going on. “They were so used to being sat on the flat with the actors in front of them and not really being able to see what was going on. It seems like such a simple request. ‘Please can we just see what’s going on?'”

The look of the Roundabout with its metal surfaces and colourful seating couldn’t be further away from a black box that asks the audience to pretend the space doesn’t exist. I can’t help but feel that there’s more to it though, a different level of spatial and societal awareness in the project as a whole. The inception of the theatre and how its creators envision it transforming some aspects of regional theatre are indicative of a strong democratic underpinning. To provide the same theatre experience to audiences anywhere, regardless of whether they’re in the Shetlands or in Doncaster, that’s consciously implementing democracy into an artistic context and is far removed from the more reactionary political statements which could be found at this year’s fringe.

Osborne explains to me how architecture of the Roundabout focuses the audience’s attention directly on the performance and on the language of a piece of new writing. “After all, that’s the most important voice in the room”, she says. It all has to do with the triangulation of its structural elements and lighting, I’m told. “The architecture of the round, not only can you see everything that’s going on but because we’re raked you’re also getting an audience reaction as well – you’re constantly tuned in to the whole room in terms of how the audience is feeling in the space.”

When she talks about her inspirations Osborne mentions the Royal Exchange in Manchester or architectural masters like Stephen Jones, who designed the theatre in Scarborough, or Tyrone Guthrie, who designed all of the three-siders in this country. Guthrie had a very reductionist approach as a director. “I feel like I’m putting myself out of a job as a theatre designer here but the idea that you don’t need a design in order to make the play work, Guthrie pioneered this.” The Roundabout team ran with that idea and the result, which following its stint in Edinburgh will go on a mini tour, has been four years in the making. The last time I sat in one of Lucy Osborne’s designs I narrowly avoided getting covered in stage blood (Coriolanus at the Donmar) so the change to an understated space-as-design seems rather radical.

Osborne doesn’t agree: “I always think about the whole space as a totality”. After several prototypes the inaugural season of the theatre presents “plays that have been stripped bare and it’s very much the actors and the words and the space that they inhabit which are telling the story”, Emma Chapman says. She is the chief lighting designer of the Roundabout and has worked on the project pretty much from the beginning. The lighting, like so many aspects of the new space, is quietly revolutionary. Designing a travelling venue that is supposed to be up and running within a day, “you don’t really want lighting fixtures hung in and all these cables. So if you strip all that out and you build the lighting within the ceiling then suddenly you’re not encroaching on that architectural detail of the venue.”

To push the limits of what was possible with LED lighting, Osborne and Chapman convinced Howard Eaton to join in. Eaton and his team, responsible for the magical lift in Charlie and the Chocolate Factory and the Olympic Rings at the 2012 opening ceremony, made some crucial contributions such as additional coding for LED and pixel mapping. How coding and theatre lighting go together and how all of that technology can be packed into a single lorry is a little mysterious but Osborne clarifies: “The key thing is that it’s an incredibly complicated system but at it’s simplest level it’s ten buttons that do warm, cold, blue, yellow, green, white, centre spot, complete theatre.” “You don’t need masses of truss and masses of tools to put it together either”, Chapman adds.

When you only need one day, six people, one supervisor and a couple of Allen keys to build the structure then that’s pretty high on the pop-up-tivity scale. “When you slot one bit on top of the next bit it wants to go down because of gravity. You’ve not actually tightened anything up or screwed anything, every little bit like Lego just slots down into the next bit to create the shape.” However, haven’t we already popped up everything there is to pop up? Isn’t the hype long gone? Osborne assures me that the nature of the Roundabout is more than an end in itself. “I’m interested in the Roundabout because it is actually built on an access of community engagement. The idea of popping something up, creating an audience just for a few weeks or whatever and then taking it all away again… I love the hype, I love the explosion, I love the energy of that but actually I think theatre is about long term engagement with the community and that’s when it’s at its most successful.”

Osborne is still a big believer in theatre buildings to provide training and meaningful community engagement but there is definitely something to be said about the economical impact of pop-ups in a theatre context. Not only does it allow companies more flexible programming when traditional houses are fully booked, it also gives the company the chance to bring high quality productions into more remote areas, or a regional theatre might be able to use the Roundabout for a month and use it like a satellite theatre to send into surrounding areas.

Erected within one day and all the lighting fixtures are hidden, the 168-seater can also be used beyond theatre by the whole community to do takeover: a children’s show in the morning, yoga at noon, workshops in the afternoon and a piece of new writing in the evening, you name it. When Osborne says that she thinks “about the whole space as a totality” then that’s what it means – the future of the Roundabout and its transformative potential for new writing in communities has been built into its design.