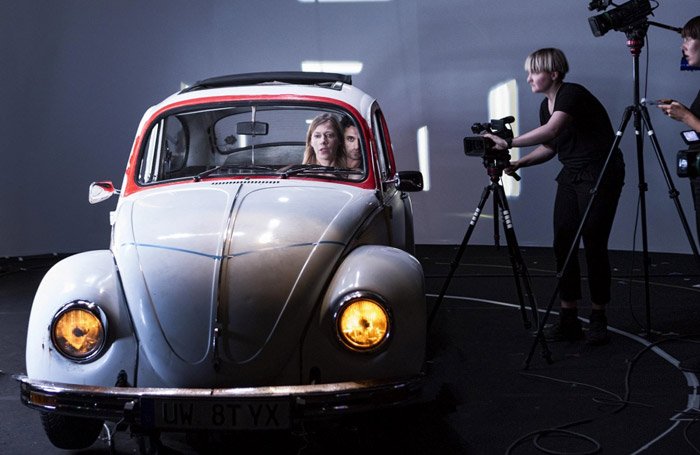 Eurydice (Jule Böwe) would prefer to stay in Hades instead of returning to her husband Orpheus (Renato Schuch), a wannabe-Morrissey who desperately needs her back to boast his own ego.

With Schatten (Eurydike sagt) – Shadow (Eurydice Speaks) – Nobel Prize-winner Elfriede Jelinek continues to twist the cultural canon to tease out the misogyny that nestles all too comfortably in the stories we tell about tragic heroes and beautiful female trophies.

At Berlin’s Schaubühne Katie Mitchell directs this Greek myth as a slick road movie, complete with a revolving VW Beetle and zombie-eyed ferryman (Maik Solbach). After Mitchell’s recent foray into short films, working with writer Duncan MacMillan and cinematographer Chloe Thomson, she has enlisted Thomson to help create this ever-shifting film set for the stage.

In 2015’s Ophelias Zimmer, her previous collaboration with writer Alice Birch, Mitchell’s ‘live-cinema’ camera aesthetic refocused the story of a sidelined female character through a feminist lens. The aesthetics of Shadows obscure more than they reveal, however, and the production consequently lacks charm. It feels at times like the taping of a particularly ponderous TV drama.

Mitchell, in collaboration with Birch and dramaturg Nils Haarmann, sculpts a surprisingly literal narrative from the original swamp of a text. And while it is intriguing to watch how the shifting corridors and tunnels of Alex Eales’ netherworldly set add uncanny depth to that journey, it means that Böwe’s world-weary Eurydice remains trapped in a production that leaves the audience oddly untouched.

Originally published in The Stage.