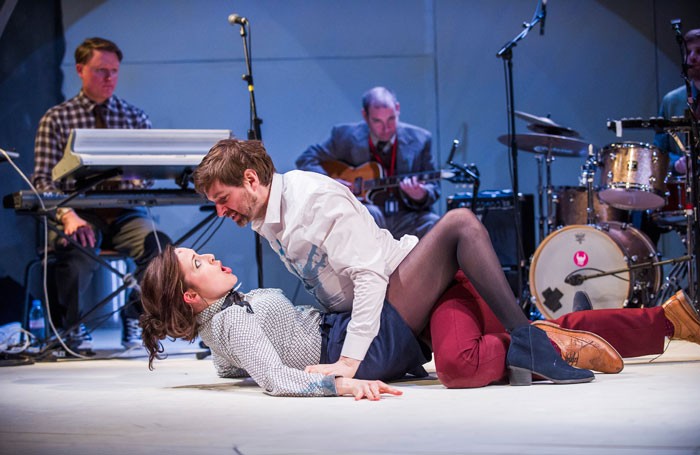 A Midsummer Night’s Dream with its self-punishing nobility making non-sensical and unmotivated cruel decisions towards their own children; its sickly sweet world-building of the fairy kingdom and the inevitable dishing up of the umpteenth clever clever twist on the play-in-the-play-in-the-play is a hard text to like, if pure entertainment is not necessarily the reason why you visit the theatre.

Filter Theatre’s version of the Dream is a big panto complete with audience interaction, musical interludes and slosh scenes – but luckily fewer fairies than expected. Revived from it 2011 production, the charm of a rough and ready improvised community production and popular-culture-fuelled sophistication come together in a likeable and knowing custard pie of a show. And knob jokes, of course, there are plenty of knob jokes.

The company gets away with the ‘meta-theatrical’ thrust, as Ed Gaughan’s rambly Peter Quince announces at least three times in one of his run-on stand-up monologues, simply because of the utter joy and silliness that drives the production. Starting out fairly straight with the lover’s spat between the Athenians it is of course in fairy land that the production really comes into its own. Food fights, blue aphrodisiac squirt colour and a whole array of visual running gags manage to expose all the ridiculous traits of the play as well as unmasking characters as what they are: self-involved pompous people that have no real concept of love.

At the expense of the broad humour most of the scenes between Titania and Bottom have fallen victim to the red marker, but that would be the least of your worries if you were to go into the show as a text completist. What’s really astonishing though is that it’s somehow still all there in the cracks of Hyemi Shin’s derelict community hall set and wisecracks of the Mechanicals.

The women, for example, are still at the mercy of men, often subjected to icky display’s of male sexual prowess. Under the influence, John Lightbody as Lysander gets out his best Mick Jagger impression, writhing and dry-humping Clare Dunne’s surprisingly feisty Helena. Jonathan Broadbent, with his hitherto unknown slapstick skills, crashes through the floor of the stage (twice) and prances around in a blue unitard sing-song-ing that he’s “king of the fairies”. His tightly clad and haze-machine befogged genitals and the way he laboriously swishes his silver cape over his head leave no doubt that this Oberon is a superman-manqué.

We know they’re all being idiots and Ferdy Robert’s gruff stage technician Puck (wearing a sizeable “hammer” between his legs) with his eye-rolling nonchalance is all we need to confirm that. This is a giddy, joyful and truly funny Shakespeare for today.