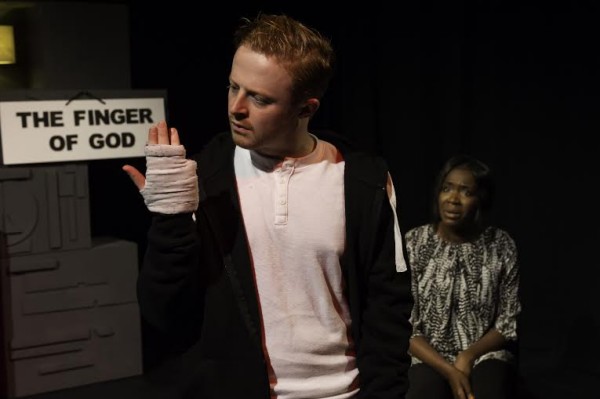 I consume politics like I consume food. On a regular basis and in any format I like. I like my eggs scrambled and my reading in the form of mildly outraged Guardian articles from a carefully curated Twitter stream. There I can exchange snarky comments with other like-minded people and if someone threatens my belief system I block them. For example, when I tweeted an article about Mike Brown the other day and someone accused me of white racism I blocked them because I couldn’t see the point in arguing with trolls and it was late in the night anyway. And when the next day comes along there is always one more new thing that’s wrong with the world. Any seed of activism that might have reared its head is buried under an avalanche of new disaster: the bashing of the working class, misogynistic perpetrators getting more media attention than the victims of their crimes.

During this latest incarnation of Theatre Uncut project at Soho Theatre, the four performers stand in front of me like a wall, facing the audience. This is something I can’t fast forward or skim-read. Clara Brennan’s _PACHAMAMA_ is a defiant act in the face of an overwhelming onslaught of information. A mother (Ruth Gibson) is transformed into a mighty Mother Earth creature. Drawing on an Inca myth it’s a sudden twist which is naturalised beautifully by the flow of words. No miming or props involves, just words weaving, heaving and moving forward – and she’s off, this surreal goddess. She has the monstrous power to shatter problematic configurations of nation states and plant them somewhere else on the planet. She can stop natural catastrophes or health epidemics being hijacked for political purposes. It’s a poetic, overpowering and empowering play which suggests we might not have to worship the god of Capital.

It is hard to conceive of a theatre project that wears its politics so clearly on its sleeve as Theatre Uncut. Born in 2010 as an attempt to respond to massive cuts in arts funding the project is now in its fourth year. This year there’s a tour around the UK and one month of mass action in which people from all over the world gain the rights to perform and transform the five pieces of new writing in any way they see fit. Within their means Theatre Uncut practice what they preach: the plays are free to perform and translators and theatre makers are given structured support to create their work. Theatre Uncut makes an effort to open up the system it is critiquing from within, both in a performance and producing model. The marriage of theatre and activism has always been a potent one after all.

Anders Lustgarten goes for satire in his Charlie Brooker-ish The Finger of God, which mocks the notion of progress and unsustainable growth. When a politician and a lottery executive discuss how to make playing the lottery more appealing to the masses again the progression into megalomania cuts right to the core. All the pieces are directed by Theatre Uncut’s artistic director Hannah Price and she uses the gorgeous set by Carla Goodman with its flexible boxes and inset lighting elements to great comedic effect. The hatred of the poor, so urgently examined in Owen Jones’ Chavs, finds its outlet when a gladiatorial twist on the Lottery system, which turns everything into a dark dystopia in which the rich make the rules but do not abide by them. Sound familiar?

Ira Provitt and The Man is Hayles Squires’ play about a policy makers whose proposed education reform threatens to transform the lives of a future generation into a numb mass. Results are all that matters, the weak fall behind. The piece looks at the degeneration of ideals and what chance there might be to recover them. Plagued by a personified conscience Ruairi Conaghan plays the eponymous Provitt as someone whose buried ideals are reluctantly at odds with the expectations of a society intent only on aspiration. If not treated carefully the education system might stop planting the seeds that enable us to act as compassionate human beings. Some might say that in some instances this has already happened and if Squires’ approach comes across as rather quixotic that might say more about my own cynicism than her piece.

Political lethargy is partly fuelled by the sense of being overwhelmed, that everything is too fucked up too fix. Inua Ellams’ Reset Everything plays with the idea of wiping the slate clean. If you can’t afford the house because of the newly introduced bedroom tax you might as well blow it up, the characters seem to think in this absurdist short. The play features a conservative anarchist, a tax inspector hidden in a cupboard, and lovelorn young man (Conor MacNeill) comically trying to fix the plunger of an oversized bomb in the middle of the room: it’s not necessarily subtle but it’s fun and provocative nonetheless.

Obfuscation of information plays a big part in the apparent political complacency of the people. The role of the media can never be underestimated too much in this context. Vivienne Franzmann’s contribution discusses how the entertainment industry robs us of our ability to engage critically with complex figurations of society. In The Most Horrific a couple sits in front of the telly and as they watch they exchange lukewarm half-truths and half-opinions about what’s going on in the world behind that screen. Global warming, banking crisis and motor neurone disease – the two don’t have the strength to be properly outraged. Can we get that in a social media-friendly and easily digestible wrapping so we can engage with it, please? In their near vegetative state they crave nothing but closure and diversion.

This is framed by a man and a woman at a comedy stand-up audition. She tries out jokes, he rates them for funniness on a flip chart with Yes or No columns. Faith Alabi, who makes a stunning professional theatre debut here, desperately clasps the microphone as she rattles off one catastrophe after another in a familiar joke format. She becomes increasingly distressed as none of her lines make it into the Yes column. It’s a glum analysis of how the problems of our society tend to be consumed like products or food. Franzmann’s deceptively simple structure makes clear that responsibility lies with media and viewers alike.
Theatre Uncut transfers the onslaught of bad news (“everything that is wrong with the world” as one of the writers put it in the talkback session) into a format that partially breaks it out of gridlocked consuming patterns. It extends an unrestricted invitation to participate through performance.