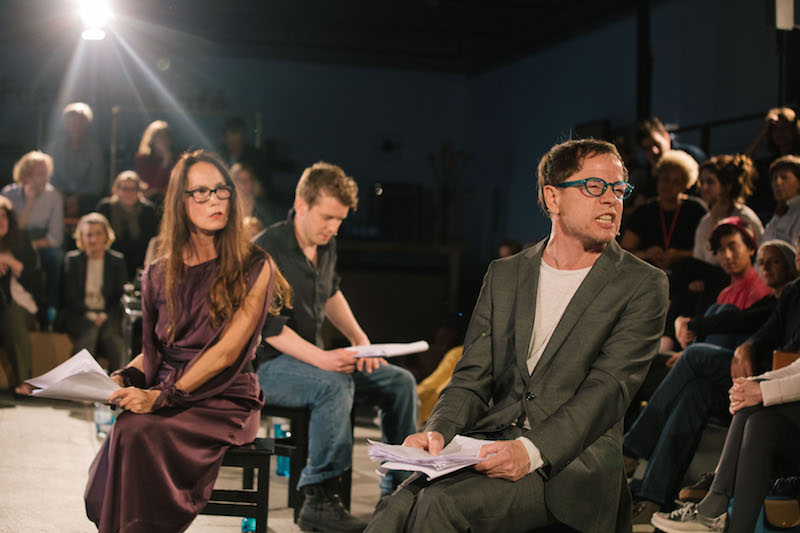 While it is primarily a showcase for the best German-language drama, the Berlin festival is also a forum for heated industry debate. For The Stage.

This May, the 55th annual Theatertreffen Berlin honours the past year’s 10 best productions from Germany, Austria and Switzerland, inviting them to be restaged in the German capital. Nominated by a jury of seven industry professionals who view productions all year round, the selection attempts to capture the essence and breadth of contemporary German theatre.

This year, some well-established theatremakers’ work is recognised, including Frank Castorf’s version of Goethe’s Faust and Thomas Ostermeier’s Return to Reims for the Schaubühne. Ostermeier is known to London audiences through productions of Hamlet and Richard III, which had short runs at the Barbican.

Refreshingly, an array of younger and more diverse voices is also being showcased this year. The black, female theatremaker Anta Helena Recke, who works in Munich but was based in London for a decade, has been invited to present a piece that brings the neglected issue of black representation on German stages to the fore.

Her production of Mittelreich, a dark musical theatre piece, at Munich’s Kammerspiele is an almost perfect copy of Anna-Sophie Mahler’s 2015 production at the same theatre. By replacing the original’s all-white cast with actors of colour at a theatre in the heart of conservative Bavaria, the director’s appropriation technique throws up questions of inequality both in theatre and in wider society.

Karin Henkel’s Loot. Women. War, a feminist reworking of Euripides’ The Trojan Women and Iphigenia in Aulis, has also been selected. Already a household name in Germany, Henkel will receive the renowned annual award, Theaterpreis Berlin.

Director Falk Richter has previously taken up arms against the right-wing party AfD (Alternative for Germany), which tried to censor his piece FEAR. This year, his staging of Elfriede Jelinek’s new work Am Königsweg (‘On the Royal Road’), inspired by the election of Donald Trump, is also part of the Theatertreffen selection.

As well as recognising influential productions, Theatertreffen has long been a forum for conversations about challenges faced by the sector. This usually relates to issues of industry structures and funding via the city theatre model, but sometimes more specific rows come to the fore.

In 2015, for example, Castorf’s loose adaptation of Brecht’s Baal resulted in an injunction against performing the piece by the Brecht estate. To counter the artistic censure in the legal case, Theatertreffen hosted the work, successfully forcing an extra staging as part of the festival.

This year, the Theatertreffen jury has waded into the debate about replacing Castorf at the Volksbuhne with former Tate Modern curator Chris Dercon. The jury nominated both Castorf’s seven-hour Faust and an immersive piece by Vegard Vinge, an enfant terrible associated with the Volksbühne. This is both a homage to a quarter-century of Castorf’s post-dramatic aesthetics of excess and a critical riposte to the failed attempt to regenerate the Volksbühne through local cultural politics.

In its role as a producer of debate, the festival does more than simply survey the state of the German theatre industry. It shows that in Berlin, theatre is never just about the plays.

Theatertreffen Berlin takes place from May 4 to 21.